I don’t know about you guys, but I appreciate a cookbook that has a lot of pictures in it. And not just any old photos, but like, beautiful photos. Full of color and composition. Because food is art, in a way. You’re making something with your own two hands, and it deserves to be celebrated and enjoyed even after the plate is cleared, don’t you agree?

Plus – and I think a lot of people would agree with me on this point – I’m much more likely to cook something up if I can physically see the finished product, like “yeah see, I did that right!” You know those Chinese restaurants that you walk into with the numbered entrees plastered all over the walls? I think that should be mandatory in all restaurants 😉

Luckily for me, I own such a cookbook. It’s Chrissy Teigen’s first published cookbook, Cravings: Recipes for all the Food You Want to Eat, and it is fantastic. I received it a year ago as an engagement gift, and Alex and I have so enjoyed cooking our way through it. For those of you not familiar with Chrissy, she’s a Sports Illustrated model, host of Spike TV’s Lip Sync Battle, wife to recording artist, John Legend, dog mom, real mom, and known in the Twittersphere as one of the best Twitter accounts to follow if you wanna just hear someone speak their mind and be hilarious about it all at the same time. What I think is coolest about this book, is that it’s not filled with only health-conscious recipes…there’s a reason it’s subtitle reads Recipes for all the Food You WANT To Eat (!).

Alex had the pleasure of working directly with Chrissy during his early days in LA, and he’s assured me that she is just as hilarious and fun and nice as you would hope her to be. Isn’t it refreshing to know that there are really celebrities out there who are as cool as they seem IRL (in real life)? 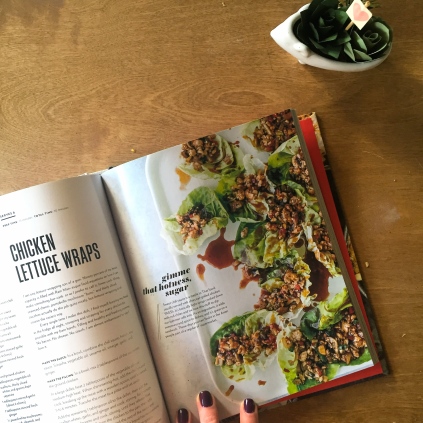 Well anyway, Alex and I had a really Chrissy Teigen Night last weekend…

I had been craving lettuce wraps for like two weeks straight and I remembered that there was a recipe in Chrissy’s book for some, and they looked beautiful and delicious, and so I decided to turn my craving into a reality. (See why this book is so aptly titled?). Al and I had offered to watch our friend Mel’s baby boy, Jaxon, on Saturday night for a couple of hours while they celebrated their Anniversary. So I thought, Saturday sounds perfect for a night in!

So there we were: baby in the living room, dog at our feet in the kitchen, glass of wine in hand, and cooking up a Chrissy Teigen original. We were basically Chrissy and John for an evening. We were pros 😉

The dish – Chicken Lettuce Wraps – turned out so so so so SO good! We had to buy a couple of different Thai sauces that we weren’t super familiar with, but now we’ve been using them to flavor other dishes all week long. It’s also a minimal-dirty dish-making recipe, which I’m always a fan of 😉 So if you’re in the market for a beautiful cookbook full of bright colors and delicious recipes – for yourself or for a friend! – get your hands on Cravings, and be on the lookout for her second book that she’s currently working on. If you’re looking for just this particular recipe, click –> here!

Now, get to cookin’!

One thought on “3.9 Cooking Up A Very Chrissy Teigen Evening”