I’ve been putting these posts off for way too long, and funnily enough, it’s not the writing that I’ve been putting off … it’s been the thought of having to narrow down my photos from the hundreds that I took, to just a few … that’s honestly the hardest part, ha!

Death Valley, the largest National Park in the lower 48 states, was established in October of 1994, which makes it not a very old park at all! It took a lot of persuading for people to finally see the desert’s beauty as equal to that of the lush green forests they were used to. And man, am I glad that they were finally able to see it. I think Death Valley is probably most known for it’s temperatures (the hottest in the world!) or it’s incredible star gazing (no light pollution!), but after taking my first trip there last March with my brother, I am just so in love with the vastness of it all, and the constant changing of the environment around you as you meander through canyons or drive on long stretches of desolate road. The reds and yellows of the land right in front of you, but painted on a backdrop of purple and blue mountains. It’s surreal, really…I feel like no words or pictures can really do the place justice. It’s just somewhere that you have to go visit for yourself and let it take your breath away. 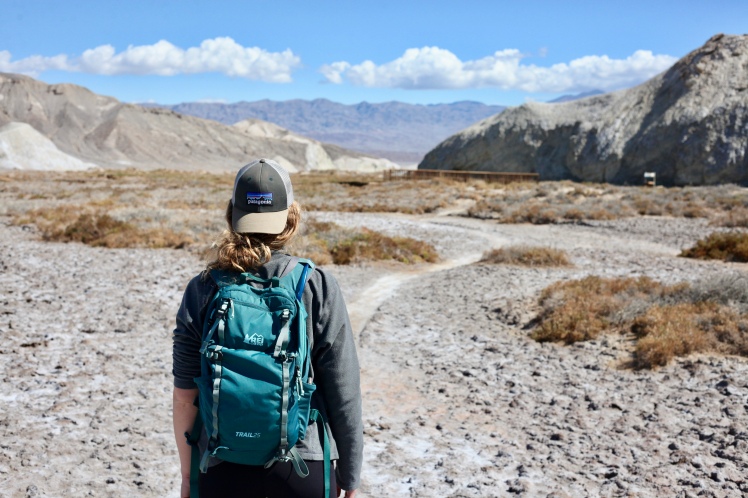 Some good things to know about Death Valley before you decide to go … it does get hot. And it also gets cold. So you have to find that sweet spot of when to visit. We went for a weekend in March and the weather was a dream, although it got very cold at night. For this reason, we opted not to cold-weather camp, and instead, made hotel reservations. There’s also no cell service in the park. So make sure you grab a map beforehand, or download any hiking trails you may want to do on your Garmin device if you have one. You should also know your way out of the park because there isn’t service for miles beyond the park as well. This brings me to my next point: the signage in DV isn’t great. Jim and I laughed constantly about this and said if we ever won the lottery we would have more signs made for this place! Again, I stress, grab a map when you enter the park! There are gas stations in the park — and three different lodging options — so you can easily fill up on gas and snacks while in the park, but if you’re planning on being out on the trails all day, pack lots of water and snacks. Although the park is huge, it seems to be lesser visited than some of the other parks, like Yosemite and Joshua Tree…they do not have a vehicle check-in line where you pay and get a parking permit … you must seek out a Rangers Station and go in on your own to pay your Park fee, otherwise you will get ticketed! And also, it’s a National Park, guys … the money goes towards keeping the lands safe and beautiful for your enjoyment, so don’t be an asshole. And finally, if you’re planning on exploring some of the more desolate areas of the park, you will absolutely need a high-clearance, all-wheel drive vehicle. The last thing you want is a flat tire out in the middle of the desert with no cell service. If The Racetrack is on your list, this vehicle is a must. If you’re planning on staying within more of the popular parts of the park, I would recommend at least a high-clearance vehicle as some of the roads are dirt, and pretty washboard-y.

Jim and I left for our Death Valley Adventure early on a Friday morning and it took us about 4 and a half hours to reach our destination (if you take the entrance through Trona, the views alone are absolutely worth the little bit of extra time). We always try to leave LA super early (like 5am) to avoid any of that famous LA traffic you hear so much about 😉 It also makes for an easy drive, especially when you plan on driving through the park on the same day! We chose to spend our weekend at Stovepipe Wells lodging center because it’s central in the park, and we didn’t want to lose any time in the mornings or evenings driving in/out of the park (the nearest towns aren’t very “near” at all) … we found this location to be perfect; the rooms were great, and there was a restaurant and a bar right on sight, which was convenient for us after long days spent hiking out in the sun! (We learned a lot from our last trip to Sequoia 😉 ) You’ll need to book your room early if you plan to stay at any of the lodging in the park. Otherwise, there is a ton of camping available in the park, and lots of Wilderness Camping available too … just be sure to be very aware of the weather whatever time of year you plan on going. 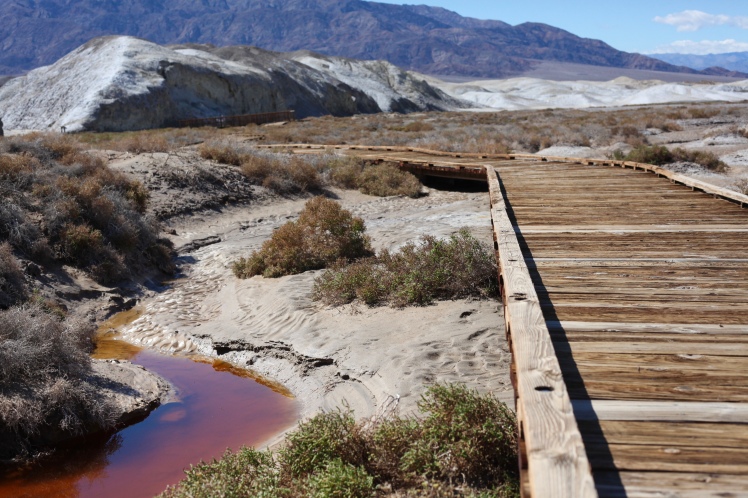 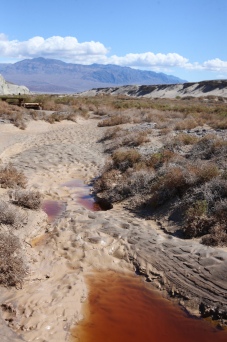 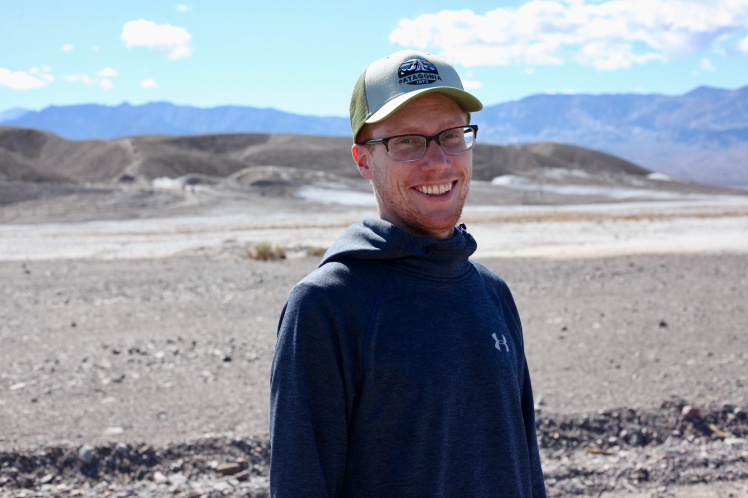 Our first stop once we got inside the park and settled was The Salt Creek Interpretive Trail. This is normally an easy 1.5-ish mile boardwalk loop, but because of the tons of rain California had been receiving, the access road was closed. We didn’t mind though because it just tacked on a couple extra miles to our hike and also deterred a lot more people from checking out the area! I don’t think we could have planned a better first stop (or a better way to stretch out our legs after that drive) … I think, even after the whole weekend, this remained Jim’s favorite spot in the park, because it’s actually home to fish! Pupfish swim around in this little water system found in the middle of the desert — they can survive in water with very high levels of saline. Over 10,000 years ago there was actually a freshwater lake — Lake Manly — that filled the bottom of Death Valley. The pupfish lived in streams that led to Lake Manly, but as the lake began to dry up, it left small water holes throughout the desert where the pupfish were living. Because the varying environments within the different watering holes, the pupfish evolved into ten different subspecies! We had so much fun walking on the boardwalk, and then later venturing into some of the saltier surrounding lands. It was really something to see fish in the middle of the desert! 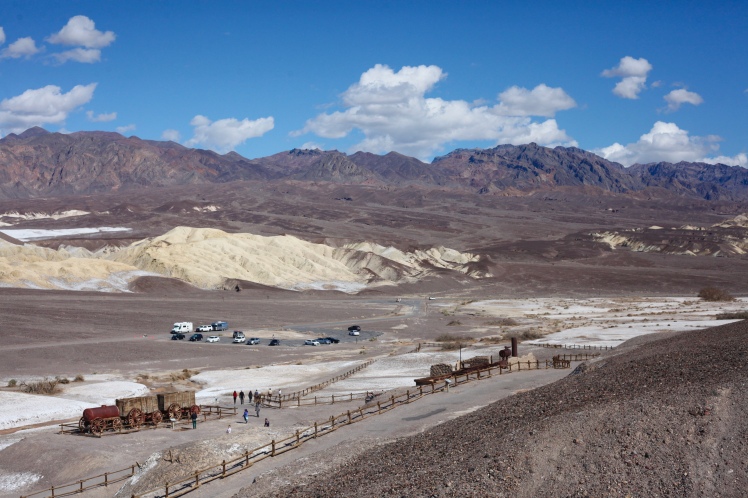 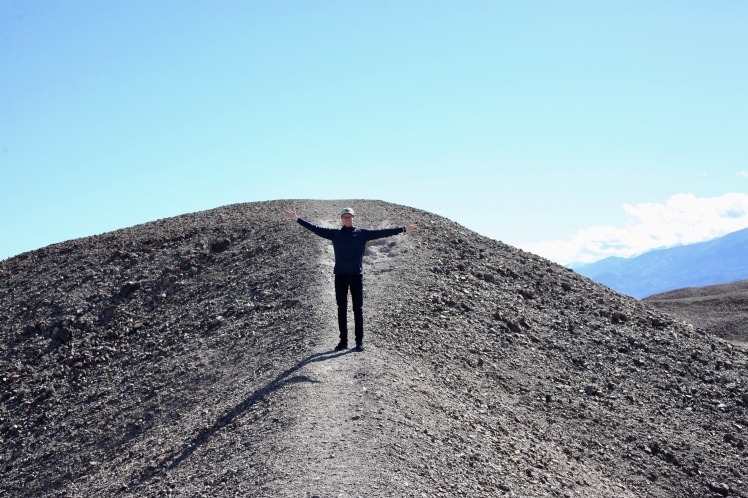 Afterwards we stopped at the Borax Works, which is an easy half mile loop exhibition. This was neither of our favorite stop, but it was cool to learn a little bit about the history of DV here. We actually skirted off the trail and up a couple of hills instead to catch some higher views of the park, which turned out to be the coolest part about this stop. We got a pretty great view of Mustard Canyon and all of the varying colors of the desert around us.

We then stopped into the Furnace Creek Visitors Center to check out the Death Valley Information Museum, which I urge everyone to do no matter what National Park they’re visiting. It’s so important to understand the history of a place you’re spending time in, and I think it makes you appreciate everything around you even more. You understand more about the people who used to inhabit the lands and how they’re still involved today, you learn about how the land was formed, what plants and animals coexist on these lands, and how the park came to be. It’s also a great place to learn about which areas are currently closed off to the public, or what practices you can implement to stay safe while you’re out exploring. People have put a lot of time into these exhibits, so go enjoy them! 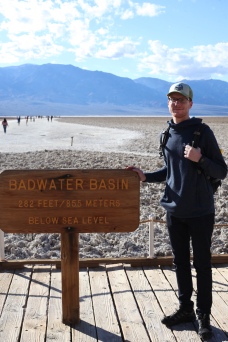 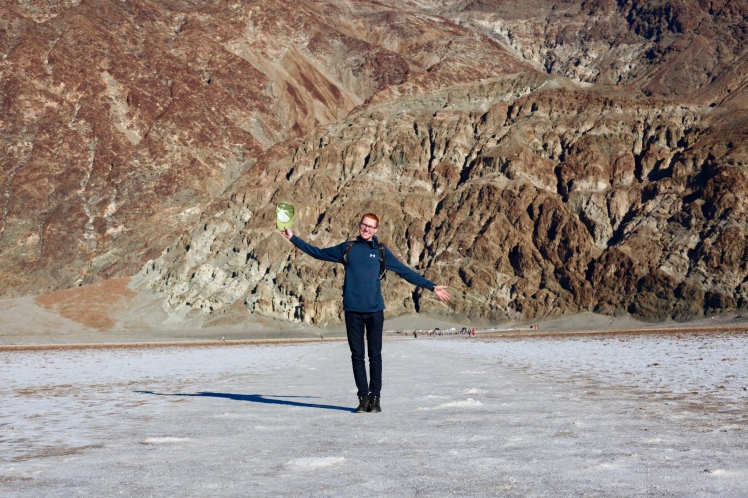 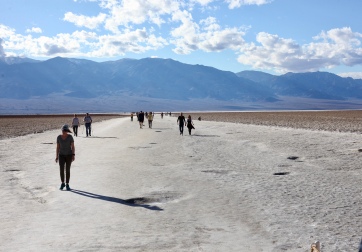 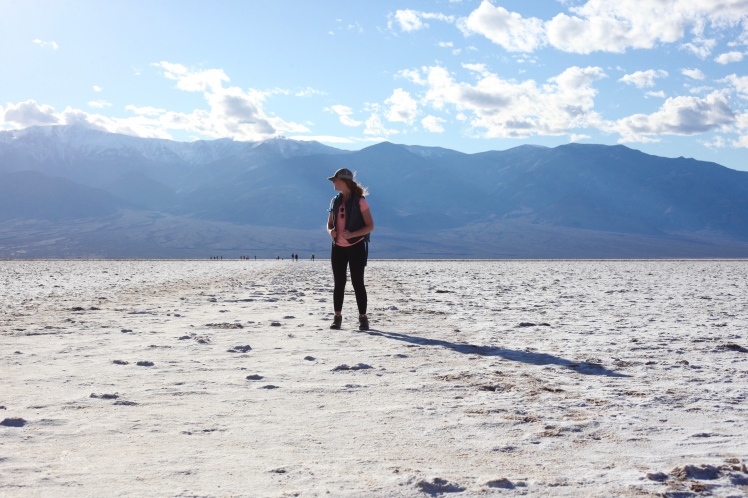 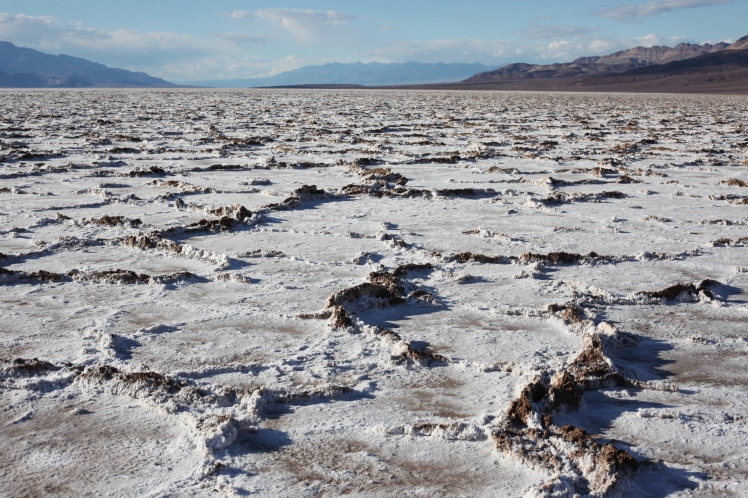 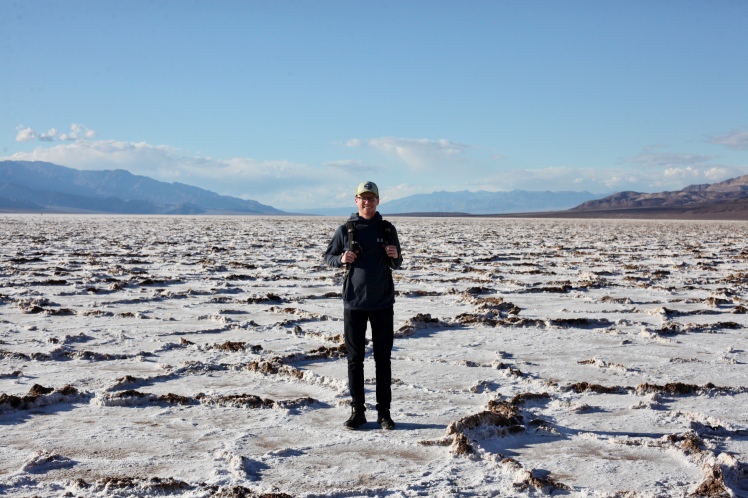 One of our absolute Must-Sees in DV was Badwater Basin — the lowest point (far below sea level) in the US! It really is wild. You can easily park your car in the lot, and then you just walk straight out onto the cracked salt flats. And there isn’t really anywhere that you’re not allowed to go … you can just walk for pretty much an endless number of miles, on this weird textured ground! It almost looks like ice crystals (like that early morning frost on the grass), but it’s actually salt deposits. This is definitely a more touristy spot in the park, but I don’t think that takes away from how amazing it is. One cool thing to note, when you’re walking back to your car … look up! There is a tiiiiiny sign allllll the way up on the big rock wall in front of you that shows where Sea Level is! You can make this trek as long or as short as you want. 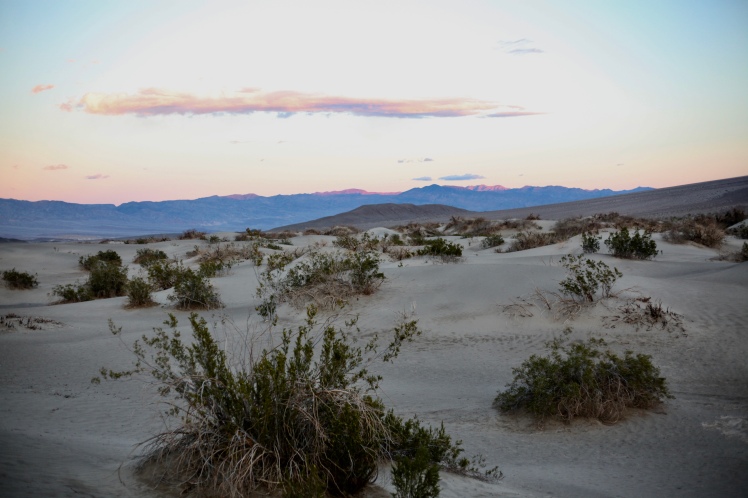 The last place we stopped in the park on our first day, before heading back to our hotel, were the Mesquite Flat Sand Dunes … multiple people told us to visit this part of the park so we knew it must be good. DV is actually home to multiple kinds of sand dunes, but these ones are probably what you’re picturing in your mind — kind of like the ones you see in Disney’s Aladdin…smooth and going on for miles and miles and miles. We stopped here on the first night for sunset and then also on our last morning for sunrise. What’s cool about the Sand Dunes is that you can venture far enough away that you can feel like the only people in the park watching the sun go down. And then a little bit of wind comes by and all of the footprints just disappear. It’s a pretty magical place… If you end up staying at Stovepipe Wells, the Dunes aren’t too far, which makes sunrise doable for anyone! 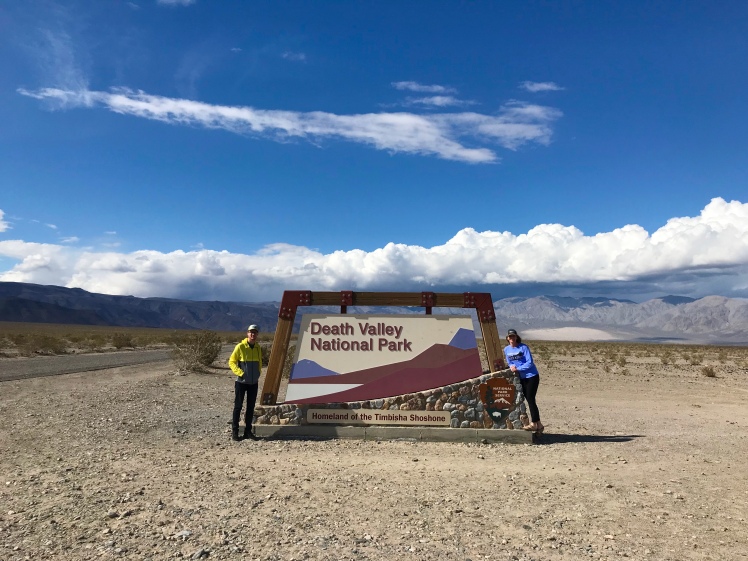 And that pretty much sums up our first day in the park! Since we didn’t have the whole day to explore, we both thought that doing some of the more touristy things on Day One would be smart so that we could spend the remaining two days of our trip (when we would have more sunlight) seeing some of the less popular, or more time-consuming areas of the park. That being said, just driving in the park alone is a breathtaking adventure. I can’t even begin to tell you how many times we pulled the car over for photos or just to look around. It’s like a completely different planet out there, in the best way possible…

Stay tuned for Days 2 and 3 of our trip!

handmade wall hangings (& other things!) to make your space happier :)